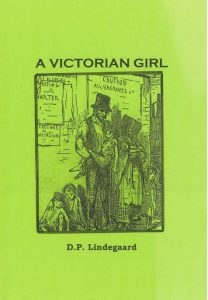 The Victorian Girl is the Cinderella story in reverse. Mary Britton, previously Leighton, was a dear old soul, who was “in Service’ in Downend from leaving school until her late marriage to Samuel Britton. They lived next door to us in Victoria Park, Kingswood and I knew Mary for all of my young life. One day she told Mum and me something which sent us reeling…….

Years after her death, by which time I had become a family history fanatic, I was inspired “to see if there was any truth in the story” – there was, though it was not quite as dire as she had always believed, but even so it was tragic. Through working backwards I found that her family story went from prosperity in Northern Ireland, to the relative affluence in the India of the British Raj (along the way making the acquaintance of Tipu Sultan, the Tiger of Mysore), an early death, a black sheep, more sinned against than sinning, the downward spiral to the Workhouse and eventually to the Ragged School which rescued the orphan Mary from a life on the Bristol streets. Without the blanket of the modern welfare state, the story of this one family demonstrates how easy it once was to fall through the cracks. I am only sorry that I did not have the knowledge to research the story in Mary’s lifetime.