The Pillinger Family – Part 1 – “From Yatton Keynell to Outer Space” 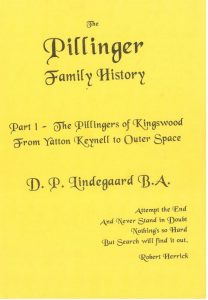 All roads eventually lead back to Box, a Wiltshire village.  This is my own clan, the “Kingswood Pillingers”. I follow the family as they journeyed from Box to Yatton Keynell where Nathaniel was born. He and his wife Sarah arrived in Bitton, Gloucestershire, shortly before they died in 1754 and 1755. Their young son John was allowed to stay and he became the progenitor of the Kingswood family. Bitton was then a very large parish with chapelries at Hanham and Oldland, the area which eventually became Kingswood, three miles from Bristol.  The Pillingers however never fully “belonged” to Bitton so each time members of the  family fell upon hard times and needed parish support, they would be “removed” to Yatton Keynell.  This sorry state of affairs persisted for over a century – conversely a godsend for the genealogist – but misery for those concerned. When “John the hatter”, son of the original John,  became too old and sick to work he was not even eligible for the local workhouse as officially he still belonged in Wiltshire. He died in the workhouse at faraway Chippenham in 1848 where I found him in 2008 after a long search. There is not much fun to be had in this tale of the coalmines and the accidents that took place; of petty crime; of emigration to the USA and Australia. I have not stuck to the direct line, but have wandered into the lives of many other descendants. The finale which takes us to Outer Space refers to Nathaniel & Sarah’s direct descendant, my brother, the space scientist Professor Colin Pillinger, another Kingswood lad, with the accent to prove it. Full details of Colin’s career can be found online. This volume was written before the more elaborate edition, “From little Acorns great Oaks grow” which can be found elsewhere on this site, thus much of the information is the same. I have included this version again for the Family Trees and for the sake of uniformity with Nos. 2 & 3.

The Pillinger Family History Part 1 – The Pillingers of Kingswood: From Yatton Keynell to Outer Space