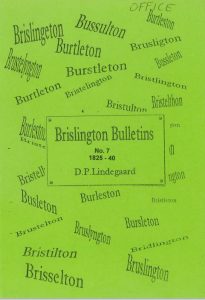 Though some ‘nobs’ continued to settle in Brislington, now well established as a bucolic watering-hole, ‘the star’ of this particular show is the Rev. Charles Ranken, who succeeded the fossil collector Rev. William Coneybeare as curate of Brislington.

Ranken is a person after my own heart, as like me, he carried a notebook with him. He made several tours of the lower orders, those backsliders among the congregation who were rarely, if ever, seen in church apart from the three compulsory attendances, hatch, match and despatch.  (From a personal point of view, it is a bonus that some of these were members of the Pillinger family.) Most of these dear souls cheerfully answered the cleric’s questions and he jotted down their answers, leaving treasure which otherwise would have been forever buried. Only one parishioner, Mary Hunt, shut the door on the nosey parson.  All genealogists have been down this particular street.

Rev Charles Ranken is sandwiched between William Coneybeare and George Cartwright. The three curates who succeeded one after another were brothers-in-law, which I suggest may be a record. William Coneybeare married Charles Ranken’s sister Sarah Ann; Ranken married Isabella, a daughter of Dr Fox of Brislington’s famous asylum, and George Cartwright married her younger sister, Anna Fox! A family tree of their intricate relationship is provided.

William Withering, son of the distinguished botanist, lived in Wick House. He died in 1832 leaving about £12,000, then a very considerable sum. Cholera raged through the country that year, but Brislington does not seem to have been affected: at least the burial registers have nothing to say on the matter. The railway came through Brislington, (the fatal accidents to those building the line are noted within the text) bringing with it an ease of travel which up to then can only have been dreamed of. For those too timid to try it, the reporter from the Bristol Mercury gave a full description of the delights of the railway line, Bristol to Bath ‘one of the noblest productions of modern art’ – which reminds me, will we ever get our station back?