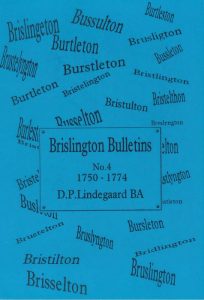 If your ancestor lived in our Somerset village during these years, quite possibly you will find him/her recorded here, perhaps in the list (names and ages), of those taken to Bristol Infirmary 1751-63, or among the Quaker membership. As usual I have combed numerous sources for the minutest detail of anyone who lived in the village during these years. Here you will find a copy of the contract supplied in 1759 to our very own “Steptoe” a Brislington resident, Jeremiah Pillinger, as “a scavenger” to clean the streets of two Bristol parishes. He died a year or two later, probably overcome by the “noisome stinks” he cleared away. William Reeve, a Quaker businessman, and a Merchant Venturer left a lasting legacy: his ‘folly’, Brislington’s famous Black Castle, which can still be seen tucked away near Sainsbury’s at Avonmeads. Following a visit to Italy Reeve was inspired to build an architectural masterpiece, the Colonnade, which formerly stood in the grounds of Arno’s Court. Damaged by bombs in World War II it was disgracefully ‘let go’ by Bristol City Council in 1959 and was resurrected at Portmeiron, the show village in North Wales. 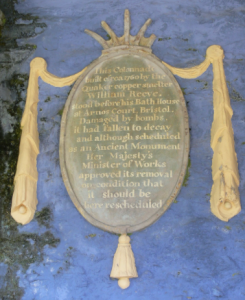 Bristol’s MP, Henry Cruger, whose reputation as a ladies’ man caused him to be lampooned in the press as ‘Pretty Harry’ made an apparently sneaky visit in 1765 in a supposed cover up in which the Brislington vestry was implicated. There is much detail of the Gleson, Lyne and Braikenridge families, along with the Harrills and Popes, one of whom, Thomas, a basketmaker, abandoned his wife Sarah Lawrence (married St Peter’s, Bristol, 1762) to trail about the country with her infants behind her. The fate of a young woman, Sarah Stone was worse still. Her body, with marks of violence was found beside the river, ‘near Mr Reeve’s’. Murder was suspected but nobody was charged. The parish register simply says ‘drowned’.