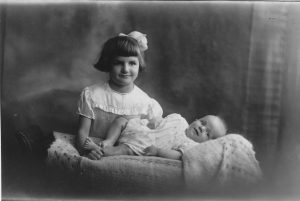 Me, aged 6 with my brother Colin (who would go on to become the scientist behind the Beagle 2 mission to Mars).

I was born in 1937 to Alfred (known always as Jack) Pillinger who dug up Bristol’s roads as a main layer for the Gas Company, but always called himself “a navvy”, and Florence, nee Honour, by trade a boot factory machinist and home help. I am the elder of their two children.

My late brother Professor Colin Pillinger, (1943-2014), the planetary scientist, is well known for his work on the Beagle 2 Lander to Mars. We both passed the scholarship to Kingswood Grammar School though unlike Colin’s, my school career was undistinguished.  I left with relief aged sixteen with nothing much to show for it apart from a few O Levels.

My late teens and early twenties were spent doing a variety of menial jobs all of which I left as soon as I managed to get a few shillings together in order to go travelling – hitch hiking through Europe. Unlike today, in the 1950s and ‘60s this was almost unheard of, especially for a girl. I was called everything between “a pioneer” (flattering) and “a crank” or even “a freak”, which wasn’t.  In the second half of my twenties I travelled much further afield with considerably more comfort as a travel agent.

At the age of 30, my life changed totally when I married Norman Lindegaard, (known as George – a habit evidently acquired by marriage – see Jack, above). Not being cautious and rather naïve, within three years we had three babies, two girls and a boy. As George was a chef, our lives were dominated by the unsocial hours of the restaurant trade, though punctuated whenever possible by camping holidays on the Jurassic Coast at Charmouth combing for fossils.

Nearer home, on one of my daily rambles with the children then aged  two, three and four, which we called “the Hippy Trail to Afghanistan” but  was actually confined to the village of Brislington, I spotted my surname, Pillinger, on one of the ancient gravestones in St Luke’s churchyard. Much of what happened to me professionally thereafter can be traced to that single chance discovery.  I had always been a frustrated writer (and failed novelist) but family and local history gave me something to research and write about.  I also discovered my family connection with coalmining which would become a core interest (see “Killed in a Coalpit”). 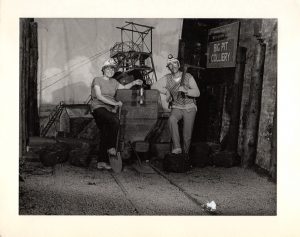 Me with George at Big Pit National Coal Museum, Wales as part of my Birthday treat 15 June 1986.

The booklets I self-published led eventually to my being offered a place as a mature student – without a single “A” level to my name, on a degree course at Bristol Polytechnic (now UWE) and – oh joy! – I even got a grant.  I graduated BA in 1992 and afterwards worked for a Member of Parliament. This was the most interesting (as well as the best paid) job I ever had which as a bonus enabled my long-suffering husband to escape from the yoke of the catering trade and set up as a jobbing gardener, an open air life for which he was far better suited.

I retired from the MP’s office aged 73, but more than a decade later have not really retired at all. I am still actually thirty eight, unless I catch sight of myself in the mirror.

I support Scoliosis Research, particularly the charity Scoliosis Association UK (SAUK) and a donation is always welcome.  I am afflicted by the spinal deformity, as was my brother. 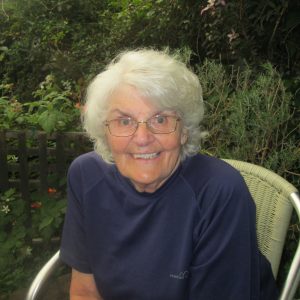 I have not told you my name. This is deliberate. I loathe both my given names, imposed on me by my Mum, who was otherwise perfect. My children and grandchildren all have different names for me the provenance of which would take too long to explain. For this blog, I am D.P. Lindegaard, so there.