John Pain, “Jul 18 1840, Mr John Pain, collector of great tithes at Bitton was thrown out of his gig at half past 12 o’clock top of Stouts Hill and died before they could get him home. Bur the 23rd.” (Couch).

George & Lewis, of Bitton, “remanded to next sessions for Meredith’s”, Riot in KW 1670, see Ellacombe

John, 16, carter at Mr Boult’s coalworks. Easton Colliery Co. earns 5/- a week, drives large carriage of coal 7-8 cwt with another boy, 50 yds. Works always at night and has done so for 2 yrs. Sleeps daytime, Goes to pit 6 in the evening and leaves 6 in the morning. Can read Bible and attends Moravian Sunday School. This lad looks pale but not indication of unhealthiness considering such unnatural hours of work. 1841, Waring.

Samuel Palmer of Kingswood, St George, who was watching the premises of Charles Arthur, 8.7.1785 and saw Highnam Bryant with lead on his back which he confessed he had taken from Mark Harford, Brass Battery. Statement 14.7.1785, QS ts BRO

John a collier returning from work in Bitton found a body of an infant tied up in a piece of old carpet, see FFBJ 18.3.1848

Joseph & John, “quite young” suffered severe contusions when bucket or cage in which they were travelling upwards at Deep Pit belonging to Brain & Co, KW, when bolt of reversing handle broke off & they were dashed to the bottom, (882 feet). Stephen Newman was killed in same incident. See BM 6.9.1851

Mr, a gentleman, who “harassed the brethren at Upton” see John Cennick’s diary, 1740

Richard of Salford (Saltford) 32, Deposition Books of Bristol: evidence that as he was carrying coals through KW whilst plying his trade as carrier. His “gray nagge” was stolen by 3 troopers who were going to Acton House, which was then a garrison, 1646.

Thomas Patrick, Henry Sweet, Henry Baker, George Cains and James Hudd taken into custody for general assault on the recruiting party on the Don at Lansdown.  Most of soldiers badly beaten, yet forebore to use their side arms. A riot then ensued with much mayhem committed at the Fair, with booths etc destroyed. (They were all acquitted the following week!) FFBJ 17.8.1811 & 24.8.1811.

Margaret, dau of William. Mark from a seal (no. 260) of the Mayoralty on a deed in the office of Bristol Charity Trustees, the mark of Edmund Westcott, Mayor 1479-80 & 1485, initials probably “E.W.”. Bristol Wills state that Edmund Westcott mar Margaret d.o. William Pavey, the elder & had a garden in “Laffords Gate”. See “Bristol Merchant Marks” in Proceedings of Clifton Antiquarian Club, 1909-1912, Vol VII.

Francis, in Gloucester Gaol for debt; after discharge was remanded back on same account; (when James Powell & Sam Wilmot were taken to gaol for riot). Not clear if “on same account” means also that he was classed with the rioters. See GJ 14.11.1738

John, remanded with others “all of Bitton, to next Sessions for Meredith’s” Riot in KW 1670, Ellacombe

Ralph,  collier, Siston about 40, middle stature, suitable as a musketeer. (Possibly the Ralph married to Helen whose son Hugh was bur at Bitton 1606 & the Ralph bur Siston 1609. Will GRO 1610)

Aaron Pearce: Mary d.o. Hannah Lock & Aaron Pearce bp Stapleton, 10.8. 1798, “This pair was married at Bedminster but the bigamy of A. Pearce is confessed.”

Francis late of St Geo, cm, “intended to make use of Act of Parliament for the relief of insolvent debtors”. SFBJ 2 May 1772 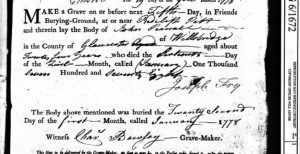 Mr T. “of Willsbridge has obtained a patent for constructing the rafters and laths of roofs and other frames of buildings.” FFBJ 15.10.1825

John Pedder, cm, of county of Gloucester, mentioned in will of Hannah Coole, Bristol, 1792

Thomas, “a man of about 40 years of age, living with his father, who had discourse with spirits see letter 2.8.1703, by Arthur Bedford, vicar of Temple Church, reprinted in “Witchcraft at Lamb Inn, Bristol”, Henry Durbin, Bristol, 1800.

Sam see James Lear, 1834 (This name is given as Perrinson, but I think this is transcription error.)

William of Crews Hole. Name included in a list of “Persons Receiving Pay from Clifton Parish for themselves and their families” FFBJ 10.1.1818

Sampson (also called Phillips) one of the rescuers of Edward Peacock & his party, underground for 10 days in Nov 1735, see Annals of KW.

John, carter at Cromhall, carried on by Long & Keeling, a stout hale lad, 16-17, earns 7/- per week, has worked 4 yrs at the pit, carts 40 tubs a day, 40 bushels each on level ground, unassisted with neither wheel nor plates. Can read very well, goes to Sunday School. Mem: “I examined this lad particularly as to any injury arising from the mode of hauling by tug & girdle, found no marks of injury; says it used to gall him at first over the hips; acknowledges the work to be hard. Says none but a strong boy could do it.” See Waring, 1841.

Doreen Patricia b1937, author of this mighty tome, sister of the above, mar Norman Lindegaard 1967

The above is a complicated series of records and people from many other places also appear.

Anthony of Hanham, cm, gave evidence that William Angell, Francis Reed, & John Pether all of Hanham, assaulted him at his lodgings at Wm Stout’s in Hanham, because he had told of Angell going to work covered in blood after killing deer, 25.3.1689, Ellacombe.

John, of Stoke Gifford & James Bridges, Attorney of Fishponds, persons to whom application should be made. (Stapleton Enclosure Act, 28 Oct 1779, Local Press)

Mr Player’s Map – This is a map of the Kingswood Area, originally dated 1750, which shows the names of many individual coalminers.  It is reproduced as the cover of Kingswood Annals, by DPL.

Dennis Pollinger (though the papers has Pottinger) Hanham, quarryman. Inquest, aged 66, fell from a house and taken to Bristol Infirmary where he died. 8.1.48.

Samuel: “1841 Decr 24: The luggage train with passengers had an accident at Sunning, kill’d 10 persons, and wounded many more. John Nurse & Saml Pollinger was with them uns hurte’d (sic). (Couch)

This family of watermen & quarrymen arrived in Bitton c1731. They survive to the present through the mar of Thomas, bp 1723 at Batheaston, son of Philip & Ann, above, mar Ann Holder, Bitton, 1754/5 whose son Thomas 1759-1820, mar Edith Rogers at Bitton 1781. They do not appear to be the same family as the similarly named Pillingers, though both have connections with Batheaston and Wiltshire. However, they are occasionally mistaken for each other, for instance at his marriage in 1828, at HTKW Stephen Pillinger is given as Stephen Pollinger! The Pollinger family is researched by Bernice Peglar, 76 Leap Valley Crescent, Downend, BS16 6TN.

Daniel, 50, 13s a week cutting coal at Soundwell Pit. Enjoys good health; is learning to read at Moravian Sunday School, KW. Has 9 children & would send them all to school on Sunday if they had clothes to wear. Finds it hard to maintain so many, provisions being so dear. Likes to keep himself and his family clean & wholesome. Thinks colliers are better men nowadays than they used to be. 1841 (Waring)

John Pool & Edward Phelps, Mangots & John Okey & Abraham Franklin of Stroud, committed to Gloucester Castle for housebreaking. “None of them appeared to be more than 14.”

John, one of the rescuers at Easton Pit fire which killed Joseph Gaynor, who came upon Benjamin Jacobs, & Robt Bush, alive, Nov 1910, WDP

Thomas, named in list of those fined for riot, 1670, Ellacombe

Samuel, 11, inquest at Hanham, crushed between wheel & body of a waggon, where he had rode unbeknown to the waggoner, BMerc 12.6.1834

Hannah, of Hanham. Name included in a list of “Persons Receiving Pay from Clifton Parish for themselves and their families” FFBJ 10.1.1818

Stephen, adventurer in coalmines no 2 Liberty, on Player’s Map, 1750

James, over 60, underlet a quarry to Wm Hickes & there was a dispute between them. He went to the quarry with his son in law James Bryant, and shot a man called Joseph Pearce by mistake. Indicted for murder & died in prison before coming to trial. James Bryant remanded for the murder. See FFBJ 21 & 28 Sept 1850.

(NB. The Rackers were one of the original “Dutch” brassmaking families, see Keynsham PR etc.)

The Bishop of Taunton died, 21.5.2006,aged 62, inconsequence of a brain tumour suffered in 2005. Consecrated Southwark Cathedral 1998. Grew up in Kingswood, near Bristol, where his father Canon Radford was vicar of Holy Trinity Church. Attended Kingswood Grammar School and trained as a architect and surveyor and studied at Trinity College in Bristol. Ordained at Bristol Cathedral in 1974 and was appointed an assistant curate at St Mary’s Church, Shirehampton. Worked BBC Radio Bristol as religious programmes producer.

Thomas, robbery of silver plate at his house at Stapleton, see FFBJ 16.1.1808

Hannah, wife of George, dec’d, collier, Siston Bottom, made oath that 33 yrs since she had a son baptised at Hanham Abbots named John, but bp omitted, 15.12.1842

Cheveril Reed: his son William bp Wick 1738: he was obviously named after Dr Sacheverell, of the  Riots of 1714

Humphrey, the elder, killed May 1605. Bitton PR. This may have been in a coalpit.

William, 10, drowned in Engine Pond belonging to Lodge pit by a blind horse which he was going to give water slipping and falling into said pond which forced the lad into the water. Inq 12.9.1798, Rose & Crown, St Geo, An order to the Duke of Beaufort to fence the pond forthwith. D260/GRO

James, potato seller, stabbed to death, Warmley side of Wick, Inquest Carpenters Arms, Wick, Jan 1898. Albert Griffiths of Church St, Barton Hill, to whom he had given a lift, gave himself up in Birmingham. See BO Jan 1898

Mary Ann, nee Burchill, who lost her father, husband and two brothers in the Starveall Pit Disaster of 1851. (She was the mother of Elizabeth & James, born posthumously). See “The Double Entry” in BAFHS Journal, 38, p30-31

Charles N. 2nd Headmaster of Kingswood Grammar School, c1950-?; not as far as I am aware of from a local family.

Ernest: of Stonehill Farm, Hanham, identified as the “man in the middle of the horse trough” in picture of people outside Blue Bowl pub, Hanham, 1927, Picture in George Elliott Collection, 18 Church Lane, Bitton, BS30 6LH.

Francis, of Mangots, “a poor coal carrier, died at casual hospital Bath from fracture of skull, rec’d by private in the 9th Dragoons” “wilful murder by some person unknown”. BMerc 25.5.1795. (bur Mangots)

James, “leader of the colliers in wildness & sin” ca 1740, see Wesley, KW & its free Churches”, Eayrs BRL. This poor deluded man broke his fiddle as it was a symbol of his former “sinful” life, and  he was held up as exemplary by those who presumably thought the destruction of music and dancing was godly – or more likely had their own agenda.

“For most conspicuous bravery when in charge of his company stretcher bearers. During the day the company had many casualties, principally from enemy machine guns and snipers. The company was holding a line of shell-holes and short trenches. Lance Corporal Room worked continuously under intense fire, dressing the wounded and helping evacuate them. Throughout this period, with complete disregard for his own life he showed unremitting devotion to his duties. By his courage and fearlessness he was the means of saving many of his comrades’ lives.”

His VC is held at the National Army Museum

The Rossiters kept a draper’s shop opposite Kennard Road in 2 Mile Hill, c1945.

Robert: “1840, Robt Rudall aged 88 kild at the gravel pits on the railroad Keynsham by the trains running over him,” (Couch).

Thomas of KW, who had his horse in the pound on the day Monmouth came, 1685, see Annals

“The Kingswood Carrier” in & out, Tues/Fri, from the George, Castle Street. See Bristol Directory, 1785