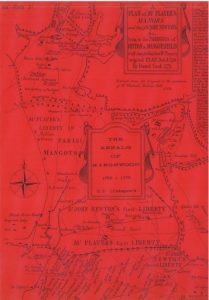 This was the first in my series of Annals of Kingswood, not a chronicle of great events, but small items of local tittle-tattle that would have been on everybody’s lips. The years 1750-75 were chosen deliberately as it was during these years that my Pillinger ancestors first tried to settle in Bitton, then one of the two principal parishes which ministered to the area then known as ‘Kingswood’, a name which derived from the ancient wood or Chase. It still nominally belonged to the King but by this time it had been taken over by mine workings and squatters’ huts. Following his parents’ deaths within a year of each other, John Pillinger aged 18, was allowed to stay, though his sister Betty was ‘removed’ to the place of their lawful settlement, Yatton Keynell in Wiltshire. For more than a century afterwards the Pillinger family would be shuttled back and forth between the two parishes. Life was hard: discover who was who in the 1753 uprising when ‘Kingswood’ people marched on Bristol in protest against the price of bread; read about footpads (a lower class of highwaymen) stopping hapless travellers; note how a poor little scrap of humanity like Solomon Chipper was bandied about between potential masters, or a man imprisoned “for three clear Sundays for the banns to be called” until taken in charge to church to forcibly marry a girl he had seduced; even how a dead collier’s head was stolen by anatomists and then retrieved by an irate father. Interesting times.