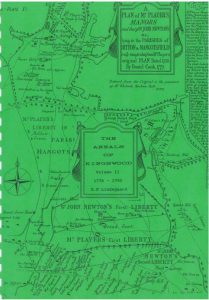 The Annals of Kingswood 1776-1795 was written as no. 2 of the series in 1992. Throughout, the drip of deaths in the coalpits loom large, as does the constant threat of the hangman’s rope in use for what we would now see as mostly minor misdemeanours. The name of the Cock Road Gang began to be banded about by the press: you probably would not want them living next door, but they were nowhere near as bad as they were painted. At the end of the previous century there were 50 offences for which the death penalty could be invoked but by the end of the period covered by this book it had reached two hundred and twenty. Most laws concerned the defence of property.

“Men are not hanged for stealing horses”, said the Marquess of Halifax, “but that horses may not be stolen.”

During these years, Stapleton Common, like most common land in England, was enclosed; another form of class suppression of the poor by the rich. The ‘notables’ who make an appearance are John Wesley (of course), John Henderson, ‘a prodigy’, who failed to make the grade, Victory Purdy, an itinerant preacher, known as ‘the Walking Bible’, the industrialists William Champion and James Emerson, Hannah More, philanthropist, playwright, and friend of the famous, and ‘the Champion of England’, Ben Brain, the prize fighter, who held the title for three years, defeated only by death in 1794.