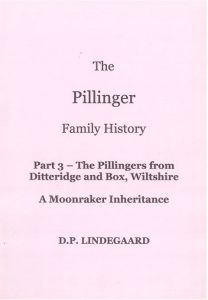 The subtitle of this volume is “A Moonraker Inheritance”. The Rev Philip Pellinger (sic) apparently crossed the Bristol Channel from Gloucestershire in Tudor times and became the parish priest at Ditteridge in about 1585 where he remained until his death in 1622. It has not been possible (so far) to link the children of Philip and Margaret his wife to the large Pillinger family of nearby Box who descended from Philip’s likely kinsman, Hugh Pillinger. The pattern of the Christian names of the various children of these two men suggests a connection and one lives in hope. You will find here human life in all its mish-mash of variations: emigrants to transportees; soldiers, both in redcoats and khaki; theatricals to canal boatmen. a classical singer (female) to a noteworthy folk singer (male). One member of this branch, Andrew Pillinger, a radio officer from Bath survived the sinking of the Sir Galahad in the Falklands War. I am conscious that History is more often than not His-story. I have always tried to include where possible Her-story; the tales of women and girls are often told in relation to their menfolk. For women alone the outlook was often bleak, like the tragic tale of infanticide told in these pages. I often pondered about the fate of the wonderfully named Hephzibah Pillinger and her child Betsey after her husband George was transported in 1834….? With George gone forever it appears she found another man – she could not marry as George was still alive, though so far away he might well have been on the Moon. I hope she found a modicum of happiness even for a short while. She must be the Hephzibah Banks alias Pillinger of Durdham Down who was buried in Clifton aged 34 on 5 February 1839….. I’ve only just found this sad event: which shows this is a hobby which never ends.

The Pillinger Family History Part 3 – The Pillingers from Ditterridge and Box, Wiltshire: A Moonraker Inheritance