The inmates to Bristol Female Penitentiary, founded in 1801, numbered up to forty young women and girls. The premises were in the parish of St James, at the appropriately named Maudlin Lane, later Maudlin Street, Magdalen or Maudlin, being traditionally the “fallen woman” who Jesus saved through repentance. The list of inmates shown below is dated 1834-1842 and is numbered 444-591.   The headings are Name, Age, Parish, Date (presumably of entry) and Family Details. This latter is more often blank, though on rare occasions the words “orphan” or “illegitimate child” may appear. It is not clear whether the girl herself was the illegitimate child, or had given birth to a child out of wedlock.

The young women named were aged between 15 and 29 years old, though the majority were about 18 or 19.  Most came from Bristol parishes and the surrounding countryside, but some had been sent from as far afield as Wiltshire, Newport, Cardiff, Swansea, Llandaff, and later, Chatham, Kent. There were evidently previous records as interleaved between details of the new arrivals, the names of inmates previously admitted are recorded, neither dated nor numbered.

Several “died” or were “dismissed” for unspecified reasons, others left for a life of drudgery “in service”. Some of the “success stories” were given a gratuity as they went on their way. In the light of present knowledge it is worrying that these young women were despatched so readily into private households. One wonders if such households were properly checked. The cursory information is now and then enlivened by the gold dust of additional remarks: even on a few rare occasions referring to behaviour. It seems implied that no 480, Mary MAGGS, 18, of Newton Bath, (Newton-St-Loe?) admitted 8 January 1836, “truly sensible of her situation and in a hopeful state of mind.”

No. 503, Elizabeth FAIRCROFT, 18, St Mary Redcliffe, admitted 31 July 1837. This poor girl was evidently bullied: “Mary Ann JAMES and Elizabeth PRICKETT made mock of Elizabeth Faircroft. They showed symptoms (sic) of penitence and were admonished. Reports to be made.”  (As I can find no instance of this surname, it may be an error in my copying.)

No. 531, Mary Matilda WINE, 18, Temple, 29 July 1839, who “made grossly false statements” was referred to the committee. As Maria Wine, “aged 15, servant” she was still an inmate of the Penitentiary in 1841. Her place of birth “Bristol” was entered and deleted.

No. 584, Abigail BROAD, 19, Clifton. “Inferred that her desire for admittance was to get food and clothing. Told to abandon her sinful habits and she might find hope of admission.” (She was admitted 29 August 1842.)

25 January 1841: Sarah Ann CHILDS “here since 30 July 1838, taken on as servant to Charles CRANE, Haverfordwest.” (Sarah Childs “aged 15, sempstress” had not moved by 1841 when she was still an inmate. Her place of birth, “Shirehampton” was entered and deleted, with “N” for “not born this county” added. She appears to have died in Pembrokeshire in 1847. Charles Crane was a silk and cotton dyer at Haverfordwest.)

28 March 1842. Anna RIMMER “dismissed being found in a state of pregnancy.” No place of birth is stated for Anna, but it seems possible that she had been a servant in the household of a commercial traveller in Manchester, before running away to Bristol for sanctuary. Some hopes.  I would not be surprised if she was the Ann Rimmer, aged 19, buried at St Cuthbert’s, Halsall on 13 May 1842.

The tragedy could have been written by Thomas Hardy.

An Annual General Meeting of the Society was convened in late October every year, when an annual report was delivered by Reverend gentlemen amid much wringing of hands, each statement outdoing the last in long winded pious pompous-assery:

“It could not be stated without pain that this year twenty two inmates had left the Home, five dismissed for bad conduct, five absconded, five left at their own desire, five taken away by friends and three obtained places in service. Fifteen new applicants had been received and at present there are twenty five present in the House. The committee hope that the establishment would not be discouraged as the object of the institution is to reclaim a class to whom the restrains of conscience had been weakened by habitual profligacy; to abandon such pitiable objects to their guilt would not be consonant with Christian principle, either they must be left helpless and hopeless in their guilt, pursuing a course ruinous to themselves for all time and Eternity…..noxious to fellow creatures and hateful in the sight of their Maker…. [more caution necessary]…..  in the reception of candidates and also to adopt more persevering and assiduous efforts for religious cultivation. (Bristol  Mercury,  31.10.1840)

“…….. no-one can deny that the unhappy inmates of a Female Penitentiary are lost beyond almost any other class of sinners, having violated every feeling of modesty and morality. Virtuous society has made them outcasts from it and unless some asylum like this were provided for them they must be left (as far as human aid can prevail) to drag out a life of degraded misery and vice; an early death without hope must be their portion and everlasting perdition  beyond ….. but here, in this House, the Saviour’s Mercy is brought before them and they are exhorted to come as weary sinners to seek for rest in Jesus Christ, and they are likewise taught with the assistance of the Holy Spirit to go and sin no more.” (Bristol Mercury 23.11.1844)

Among the accounts was £97. 15s 0d which had been produced from needlework by the inmates – it would have been about £12,000 in today’s money!

In 1837, the matron of the Home died.  She seems remarkably old if the brief announcement in Bristol Times & Mirror, 14.7.1837, is correct. “Mrs Rachael Lawrence, 88, matron of the Female Penitentiary.”

The register of the inmates 1834 – 42 is as follows: (Reference 35722 at Bristol Archives plus more records of the Institution.) 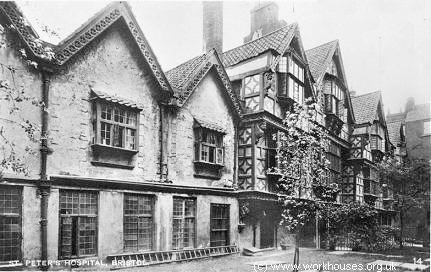 St Peter’s Hospital – Bristol’s Workhouse, where several of the Penitentiary inmates were sent. The building was destroyed in World War 2.

NB: Ages in the 1841 census were given to the nearest five years – so the 15 year olds would have been aged between and 15-19, those given as twenty years old would have been between 20-24. The place of birth was not usually stated in 1841, so this is an unexpected bonus – which on occasions differs from the register book. 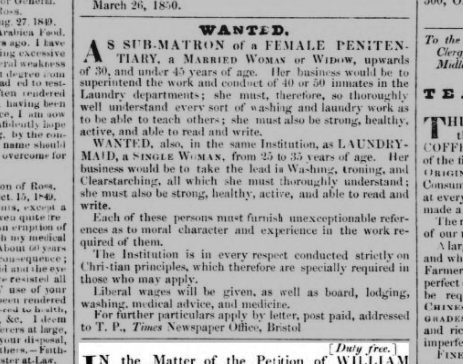 An advertisement, Bristol Times and Mirror, 30.3.1850, from which it would appear that the new matron was not long in the post by the time the 1851 census was taken.

The 1851 census is much more explicit than that of ten years before, and the gives the status of the inmates, in relation to the Matron, as Head of the House, in each case demeaned as a “Penitent”. They were all engaged in “domestic work”, making it possible to envisage the rough hands and smell the carbolic even from this distance.   They are all listed as “unmarried”.

The address, 2 Upper Maudlin Street, South Side, St James, Bristol, if it is the same, is a small property in a rank of houses opposite the Bristol Royal Infirmary. It is currently a shop and art gallery. (At the time of writing, 2021, it is closed because of the Pandemic.

If your ancestor is named here, or you can add more details, please contact me.

A less detailed version of this article first appeared in the Journal of Bristol & Avon Family History Society.