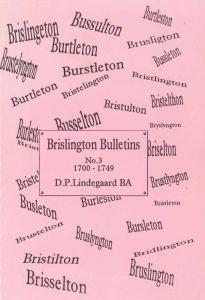 The third Brislington Bulletin, 1700-49, chronicles a more settled time at home, though foreign wars made the news abroad. Brislington began to attract a merchant class eager to retire to the countryside away from the bustle of commercial Bristol. We encounter the Glesons again from the last Bulletin, and for the first time, the Braikenridges, but the star of the show is Joshua Wharton, a Bristol mercer who had retired to the village with his wife and two daughters. He is pure gold for the family historian, for he kept an account book, (BRO ref 6783) intersected with gems from his personal life, his family and most vividly his chronicle of his daughter Betty’s illness. The primitive ‘cures’ she endured for years leading up to her eventual death the day after Christmas, 1738 makes one thankful to be living in the 21st century, despite our own uncertain present. Latterly Wharton conducted an on-gong feud with the new vicar Michael Hunt, and does not pull any punches regarding his adversary’s character – though of course it is one-sided. We even hear of Joshua’s ‘coz ‘ Thomas Murry who sailed to the Guinea coast in ‘the Antelope’, a Bristol slaver. Joshua’s will, dated 21.4.1744 is at the National Archives, ref PROB 11/733/105. His name is remembered in the flats called ‘Whartons’ at Callington Road, Brislington. But it is not all Joshua. The usual doings of the rank and file are here, including new arrivals, my own kin, the Pillingers as well as another well-known local family, the Coggins. Both remained for several centuries.