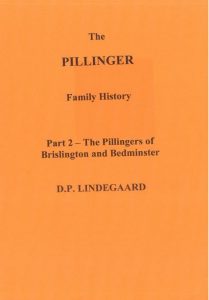 These Pillingers (like the Kingswood Pillingers) descend from the Box, Wiltshire family and are arranged in family trees. They arrived in Brislington, then a Somerset village, from Batheaston in the early 1700s. Descendants of this first family, Jeremiah & Betty, were still in the parish two centuries later. Meanwhile others departed for Bedminster, and various suburbs of Bristol as well as much farther afield.  I have written elsewhere about my discovery of the Brislington Ps” when I settled here more than 50 years ago. Without this chance event I might never have begun the journey which has kept me occupied ever since. You will find among their number a scavenger, a policeman, a railwayman, a sailor lost at sea, a potato dealer, a local preacher and even a centenarian who appeared in an advertisement for George’s best bitter. Major Roland Pillinger, also known as “Pilse” or “The Little Hussar” started life as one of the “Brislington Ps”. I recommend the wonderful website devoted to his life and career with the photographs and artefacts collected by his descendant Richard Pillinger.  Richard appeared on a Remembrance Special of the “Antiques Roadshow”, 14 November 2011 when he showed Memorabilia from Pilse’s Boer War service. The clip can still be viewed online.