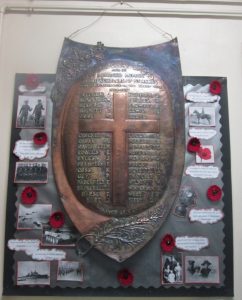 The bronze War Memorial Plaque which honours the fallen scholars of St Anne’s School was rescued from the obscurity of a broom cupboard and lovingly restored to its rightful place by the school caretaker, Mr Clive Hopkins.

If you attend church on Remembrance Sunday it is quite likely you will hear the names of the local War Dead read aloud by a member of the congregation.  St Luke’s, Brislington is no exception. A plaque inside the church contains, in alphabetical order, the surname and initials of those who fell in two World Wars. (There are similar memorials at St Anne’s, both church and school, and the United Reformed Church.) As with most such memorials there is no reference to age, rank, or date in which death occurred. The church does have additional information in the form of the Commonwealth War Graves Commission lists. These lists show rank, date and place of death with the whereabouts of the grave/memorial and in some cases the next of kin of the deceased.

Whilst I too started with CWGC lists, my book has expanded into a history of the Great War as experienced at Brislington and St Anne’s in the order in which the nightmare unfolded. Thus we see events through the eyes of the individuals concerned who, of course, had no idea how or when it would end. You will find here biographical information of volunteers, conscripts and survivors in addition to those who lost their lives, plus the activity which was taking place on the Home Front, with particular emphasis on women. 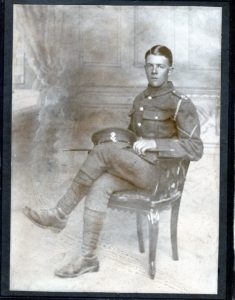 At the start of the war, the relatively few local casualties consisted of Regulars and those unlucky Reservists immediately called back to the colours. After the first enthusiastic wave of patriotic volunteers failed to meet demand then conscription was applied. Our men died in groups in their particular battles including the surge at the Somme in 1916. As the war dragged on, the criteria for those eligible for conscription widened to include older, married men with families as well as very young men, little more than boys. This is especially reflected in our fatalities during the last furious gasp of the “Hundred Days” before the Armistice in 1918. The bulk of the Brislington and St Anne’s war dead were in the Army, with considerably fewer sailors, (both Royal and Merchant Navy), with fewer still from the ranks of the fliers of the RFC and RNAS, (in April 1918 these two latter groups merged to form the new RAF.) In addition to those remembered on the various plaques, some men named here do not appear on any of the local memorials; some have affiliations with our two villages but are on memorials elsewhere; a few have defied positive identification altogether.

The effects of the war, and the fatalities, continued beyond 1918 and so this history continues to include the Peace Day celebrations in 1919 and the unveiling of our, very modest, village War Memorial, which is tucked away almost out of sight in Eagle Road.

We Shall Remember Them – Index of names – Brislington & St Anne’ WW1